Fire at sea is the stuff of nightmares.

You can save yourself and the crew without losing the vessel however. Whenever you are at sea, always think about fire prevention at core to your activities.

Don’t have a barbecue on the deck or below,Never some below deck.Don’t let naked flames near fuel or gas.Turn cooking gas off at the tank when not in use. 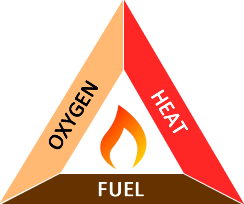 As you can see in the diagram above fire needs three things:

Cutting any of these three off will kill the fire.

Stop the fuel leading to the flames. This could mean turning off the gas or fuel tank.

Here are three situations you will often see:

FLAMES ON YOUR COOKING

If a cooking oil fire, get a wet towel and drape it over the cooking pot. This will cut the oxygen from the flames. Immediately cut the gas off from the cooker. Leave it to cool. NEVER put water on cooking oil flames as it will explode and burning oil will get everywhere.

Turn off the fuel to the engine. Use the engine compartment fire extinguisher to cover the base of the flames in powder – this cuts off the oxygen. NEVER use a water extinguisher on an engine fire as the fuel is liquid and will just float on top of the water as will the flames.

Turn off the batteries. Use a powder extinguisher to tackle the base of the flames. DO NOT use water as this will electrocute you.

Most fires can be quickly dealt with. Get back to port and call Kavas Yachting to report your problems. We will help you resolve your problems as soon as we know.