Whether setting out on an ocean crossing or merely island hopping on a Kavas yacht, you are down to your own devices.

You won’t see a helicopter drop down over the person who has fallen in the drink for a good hour.

There are no marauding fire engines at sea looking to put out the fire on your yacht minutes after it has caught.

There are no marine police checking every collision situation, ready to pounce on the idiot who has been ogling his friend’s girlfriend and not been keeping an effective lookout.

Kavas yachting office, provide its clients (while check-in) a flyer, with the following info:

Notes for the skipper

Standard practice on going to sea is to give the crew a three minute briefing before you leave the dock. This refreshes their minds as to what may happen, particularly in a busy waterway where the contents of a marina are disgorging for a day’s sailing in different directions.

In addition before you set out on a week or two week Greek yacht charter with Kavas Yachting (or any other multi-port extended trip) you should give a 10 minute interactive briefing where you remind the crew of all the circumstances in which they need to act to save everyone’s, someone’s or just the boat’s life during the cruise…

Let’s look at the two briefings individually, starting at the top with the pre-cruise briefing.

On the Kavas Yachting Beginner's Guide to Sailing, we give you a complete refresher course on sailing a yacht. Have a read of that - as with the crew, you may not have been aboard a 9 or even 12 months yourself.

You should lead a directed conversation where the whole crew says their part but you don't end up getting stuck arguing over whether a deliberate gybe or a slam tack is necessary in a man overboard situation.

Lead it, cover the points, and get on with the business of the day such as letting go the lines and going to sea once more…

What needs to be covered? 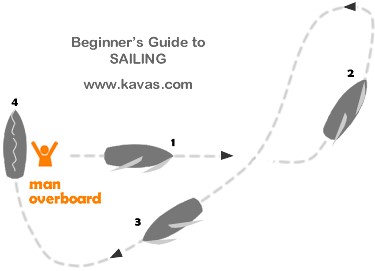 How you plan to resolve the situation. Remember, it may be you the skipper in the drink and your total landlubber partner in charge! Grab everything that floats except the wife and dog and chuck it to them.

One crew member keeps their eyes on the casualty and points at them.

The person at the helm gets the wheel over and gets as close to the casualty as possible. The vessel stops. Using a boat hook as necessary, drag the casualty aboard.

Administer First Aid and call Pan Pan Medico on the VHF as necessary (but not always).

Liquid fires such as oil in a pan should be covered with a cloth or towel - do not use water.
If the flames have caught on solid fuel such as wood, soak it in water.

See our Sailor’s Guide section on fixing holes on a boat.

In the 10 minute briefing, remind people of the Rules of the Road and to always keep a 'weather eye' out for other vessels, no matter how bright the sun is and how light sensitive your eyes may be due to the booze the night before.

If you’re both holed, call Mayday on Channel 16 on VHF. Do try to get into port without calling for help as it adds to the bureaucracy if you call the emergency services, but don’t be an idiot about not calling for help!

Make sure the essentials are fresh in people’s heads.

Not every injury is a reason to call Pan Pan Medico on VHF.

Is Gas turned off?

What do you do if you smell gas? That cigarette you’re about to light could turn the yacht to matchwood. Two people smelling gas is often a good thing to be sure you are. Turn off the LPG at its valve.

There’s times it likely won’t give you trouble (in open seas when it doesn’t matter) and there’s the moment a ferry is coming at you fast in a narrow channel and you need to get power on quick when the Diesel Demon will strike.

Is something tangled round the prop?

One of those will often resolve it, but generally after the crew of the ferry will have told you something impolite you don’t understand in Greek.

Where are the lifejackets?

They should be no more than 10 seconds out of reach unless they are a child, where they wear it as soon as the boat is off the dock. Everyone should have one they have fitted to their own body. Remember the crotch strap!

Remind people not to step in a loop or use their fingers on a winch. To keep their heads below the boom on the coach roof when on a downwind run. In any decent seas or after sundown that everyone shall wear a harness and be clipped on as soon as they leave the cockpit for the coach roof or foredeck.

Finally, the weather briefing - a 2-3 minute talk if the weather is set to change in any way that day.

You may have chatted for a minute or a little more on each of the points above. Every day thereafter (no matter how your know-all teenage daughter moans about it) you give the three minute, three point safety briefing before casting off.

Man overboard and how you will tackle it

There are sexy ways that are drilled into you through the Yachtmaster courses, there are ways of sailing in a perfect circle to stop dead beside the casualty.

For the once-a-year Greek charter sailor it may well be a case of dumping the sails, switching on the diesel and getting to the casualty as soon as you can.

Always have a member of crew pointing. The only prize you win for a good man overboard situation is if the casualty comes aboard uninjured and in need of a hot coffee. Anything else is a disaster…

They are mostly avoided by keeping a good lookout. In a previous blog we at Kavas have discussed two gut wrenching incidents where a proper lookout wasn’t in place. Three boats wrecked and one fatality, as well as several professional sailing careers holed below the waterline.

Yes, your partner or friend’s partner may be as dazzling as Helen of Troy but their curves will count for nothing if you hit someone you might have spotted five minutes before. Besides, if it was your fault then you are in with less of a chance of enjoying those charms you have been pondering…

Read more in our Blog:

What to do in unexpected incidents

Remember the fire triangle where a flame will only exist with heat, oxygen and fuel. Cut off one and you’re home free.

Sailing is very like life ashore in so many ways. There will be highs and fun times. There will be challenges and lows. The most successful people in this world claim they have deep reserves of self-reliance to which they will reach in a variety of situations.

Throughout my sailing career I have had a wealth of incidents from losing spars to sinkings where I have firstly attempted to resolve the matter myself.

I've been rescued twice in more than 37 years of sailing everything that floats - only one of the shipwrecks, and one where I had a crush injury to my leg (and even then I had to explain to the US Coast Guard rescue team how to tie a bowline to lower my stretcher to their well armed dory).

If you like nothing more than talking to men in uniform about how helpless you are and feel you’ve missed out in life unless you have been to the hospital at least once a month, then so be it.

Most sailors get more of a kick out of saying something to the effect of "Phew that was close! The pan caught fire and we threw the fire blanket over it, and did you know it really worked?" rather than spending weeks on the phone to Kavas insurance company and their lawyers having deployed the life raft instead of putting out the flames…