Characteristic of this family of islands are the crystal clear, turquoise waters of the Ionian sea which surround the islands’ coasts making them one of the most scenic destinations of the Mediterranean.

Surely you must have heard of the striking beauty of the "wreck beach" of Zakinthos, of the movie "Captain Corelli's mandolin" filmed in Kefalonia, of the homeland of Odysseus, Ithaca, the private island of Aristotle Onassis, Skoprios, or the palace of the empress Sissi "Achillio" in Corfu.

A tour of these attractions can certainly make up for quite a vacation all that’d be left to do is choose an organized beach where you’ll find restaurants, beach bars, and sun umbrellas, or a secluded one where you can relax with your favorite book.

If you love water sports, you're in the right place:

windsurfing, kite-surfing, paragliding, and even bungee jumping can readily offer a boost to your adrenaline!

The major islands of Corfu, Kefalonia and Zakinthos have an airport, while the island of Lefkada is served by the nearby Aktio airport.

In order to truly understand and connect with the Ionian islands’ culture it is important to keep in mind that according to archaeological finds, the history of this group of islands begins as early as 4000 BC during the Neolithic period.

Three thousand years forward, Odysseus, as known by Homer, reigns in Ithaca and participates in the Trojan War.

Less than a century BCE, the Romans conquer the islands for 570 years (until 394 AD), followed by the Byzantines for another 791 years and then the Normans for 315 years.

Subsequently, in 1500 AD a fascinating period began for the Ionian islands with the Venetian occupation of 297 years, when the characteristic Ionian architecture found in Corfu is shaped, along with a rich literary and musical tradition of Italian influences, with operas, choruses and lyrical music, flourishing. Moreover, the educational level of the people is being upgraded, as many choose Italy for studying.

The Ionian islands were also heavily influenced by the short presence of the French (12 years) which brought the Ionians in touch with the ideas of enlightenment, that is, the love for knowledge, freedom and happiness, which in turn layed the foundations for the shaping of the Greek national consciousness.

It is noteworthy that the national anthem of the Greeks, "Anthem in Freedom", was written in 1823 in Zakinthos, by D. Solomos.
The French occupation was followed by the 55-year British rule and finally in 1864 the Ionian islands were annexed to Greece.

One can easily imagine the effects that this cultural exchange had on all those nations that came in touch at the Ionian islands during their long and rich history. It appears in the end something entirely unique was formed inside the Mediterranean climate which is still being rediscovered generation after generation of visitors!

Religious festivals aren’t just about piety and churchgoing - they are a very good excuse to have a party. Nearly every month of the year the Eptanissa islanders will find some excuse to get out on the street, drink too much wine and celebrate one festival or another.

This is a very cheap way of entertaining the family while getting a bit of culture in to your visit to the islands! Do look out for the festival of Saint Spyridon in Corfu who is reputed to have warded off the Turkish siege in August 1716 - if you are around on August 11th, then watch the islanders celebrate like there is no tomorrow!

Similarly you will find the Festival of Saint Dionyssios on Zakynthos as a wild and fun time. The Patron Saint of the island died in 1622 on December 17, but his body was moved and reinterred on the 24th August 1717.

This means the Zakythos islanders have two excuses to celebrate this man of God! If you go inland on any island you will almost certainly find a celebration of some sort - you only need to scratch the surface lightly to find something. 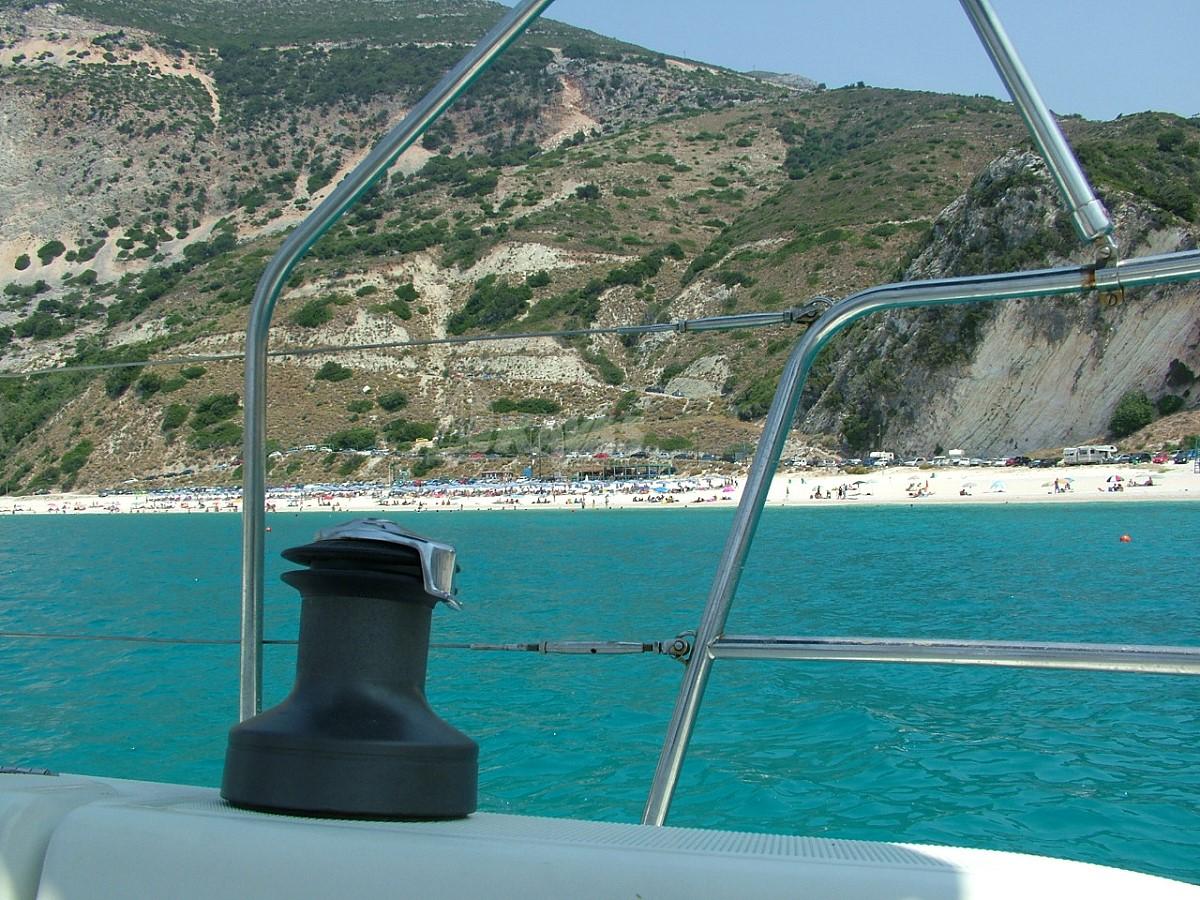 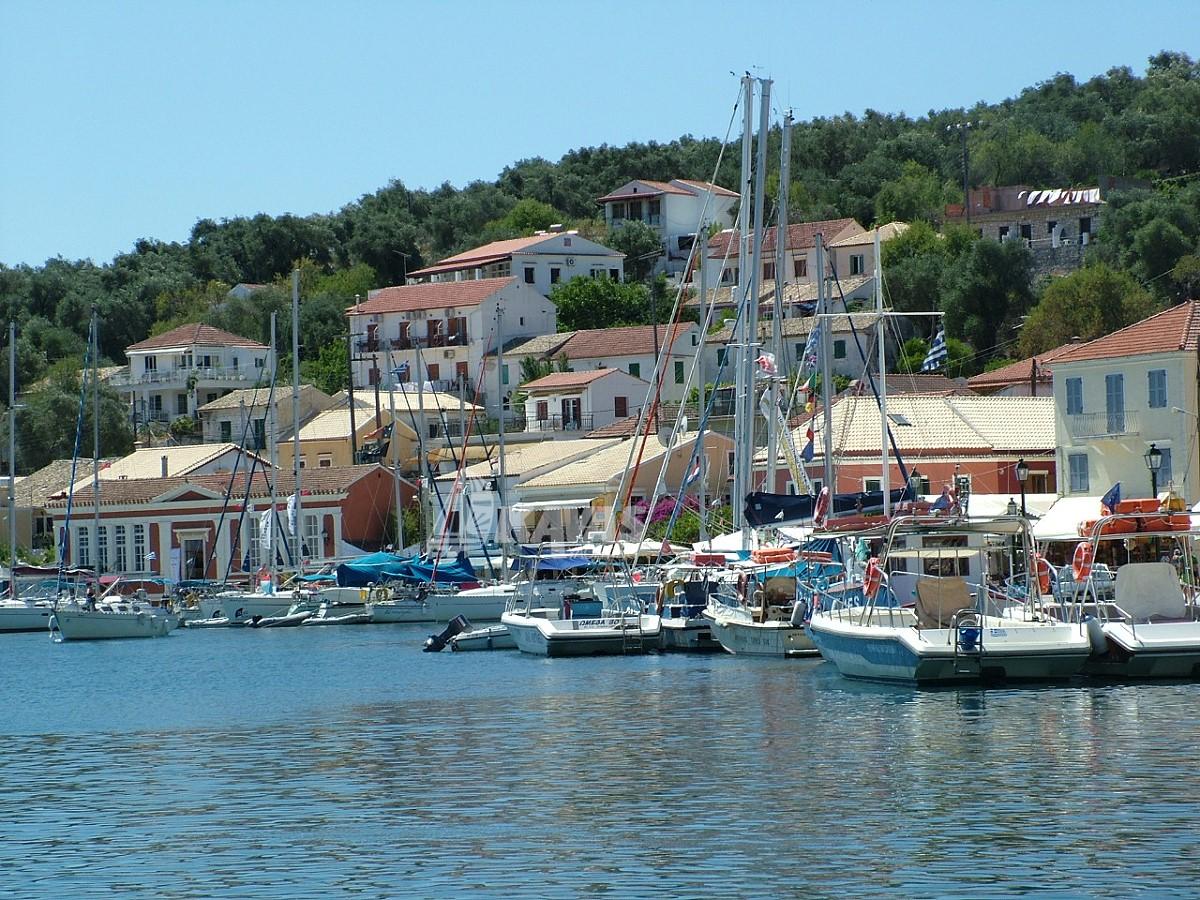 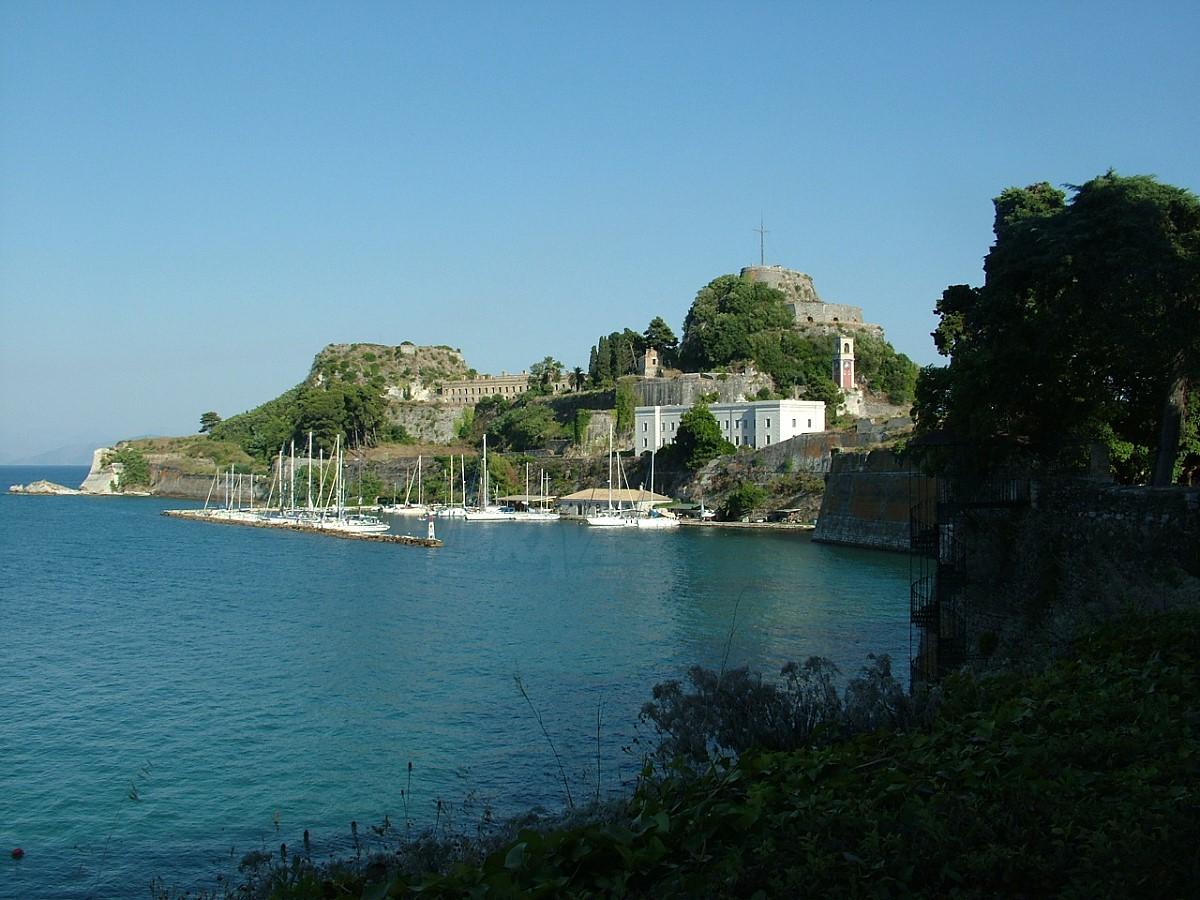 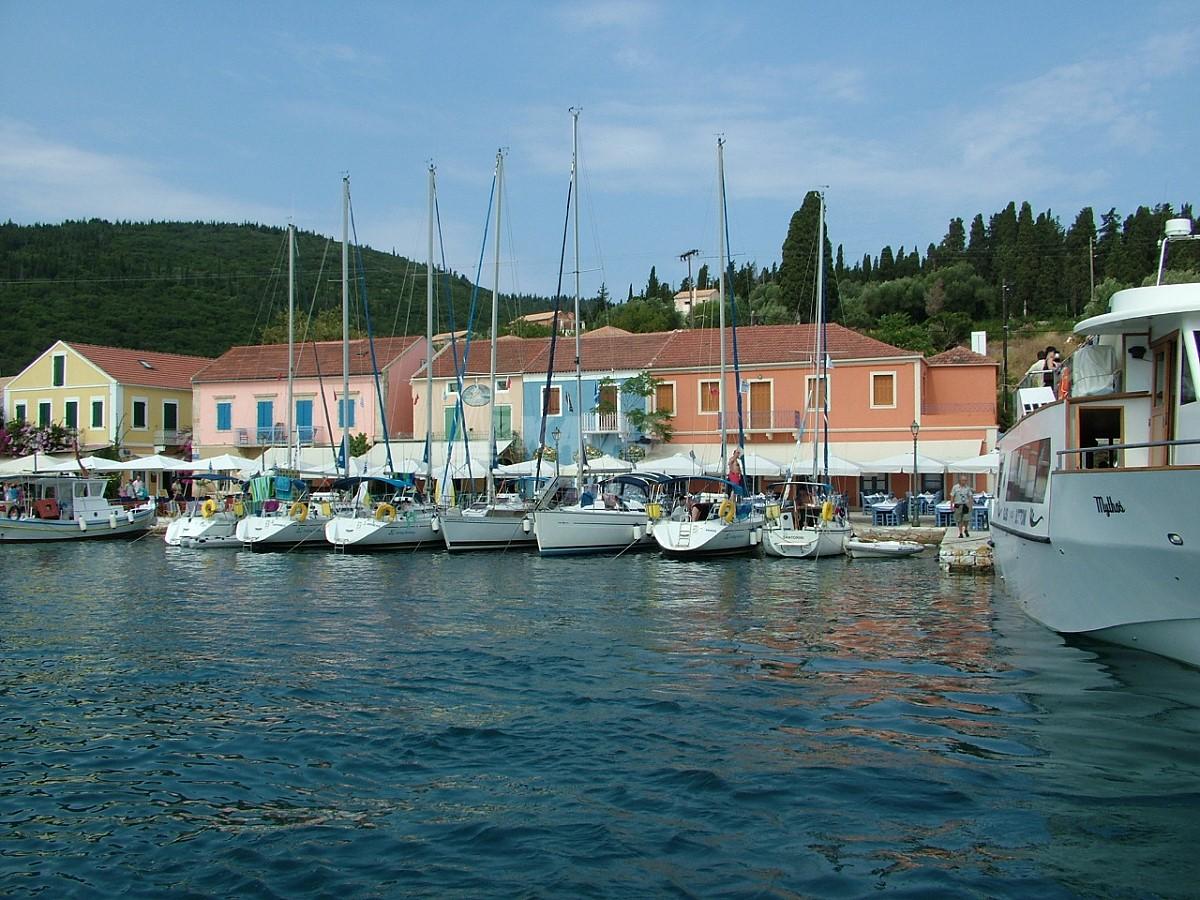 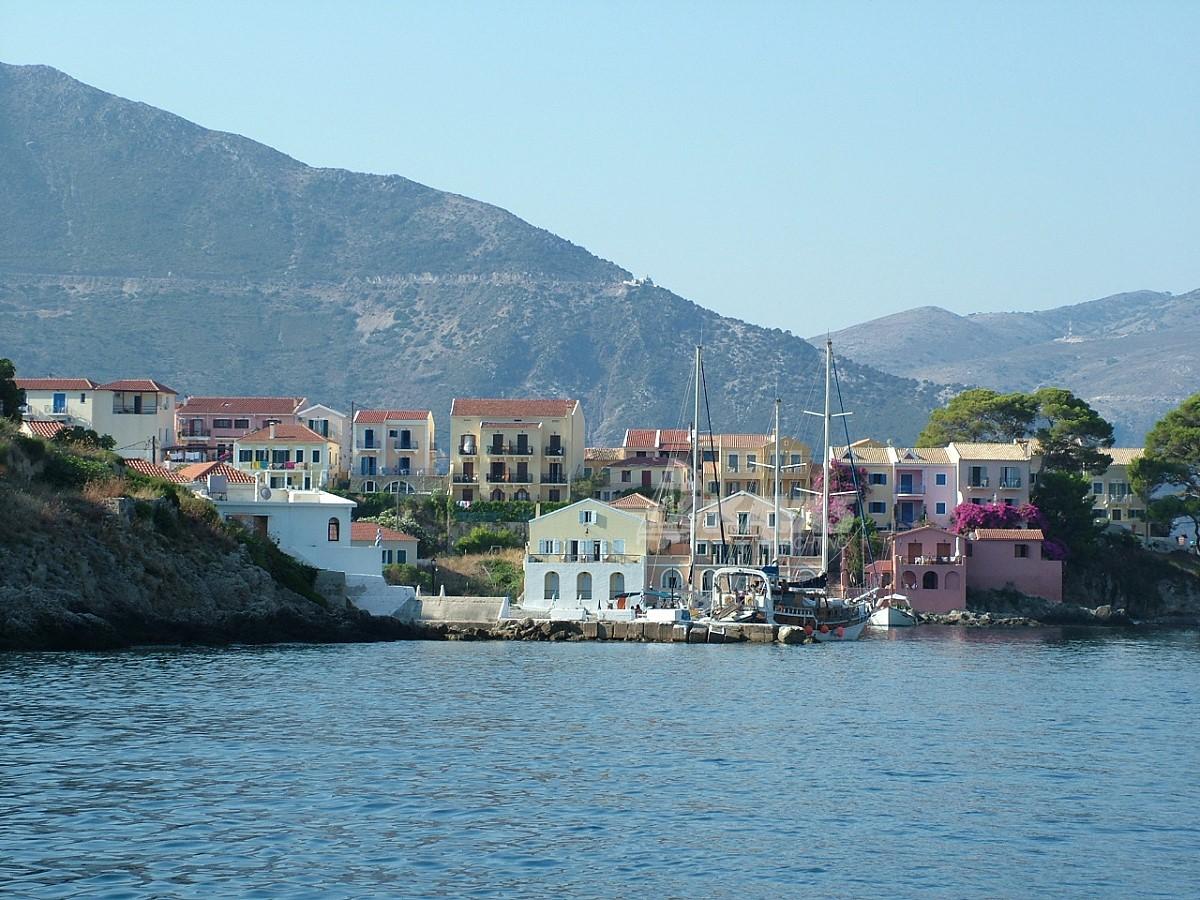 There are two big modern marinas in Ionian, in the islands of Corfu & Lefkada.

They charge an average fee of 50 euros per day.

Sailors can avoid these marinas as there are places to moor close by for €0.

Other, smaller ports may only pay €2 a day for mooring, if there is a fee at all.

Free places could be found easily anytime, while in Ithaca or Paxi isl. (Gaios), Kefalonia (Fiskardo), during the high season this could be very difficult.

Do you have to moor in every port at the centre of the action? You may be paying to have loud drunks next to you! It may pay in sleep and of course your wallet to anchor a little way off and come into port by dinghy. This may well pay off as the Ionian is so magical wherever you go.

Unlike Western Europe we moor stern-to in marinas - this is a trick we look at in our Sailing Guide.

Equally you will find quiet anchorages that you can get respite in from the hard living of the major towns.

The so called "jewel of the Ionian Sea" and surely the most famous amongst its neighbors, also happens to be the cultural center and the most visited island in western Greece.

One of the Ionian islands, Lefkada is well-known for its famous beaches and its turquoise waters. Its marina, prides itself on being one the most modern marinas in the Mediterranean.

Our Lefkada Island yachts base is situated at Lefkas marina, one of the most modern of its kind for yacht charter in Greece, with a capacity of 620 boats. Lefkas marina is right inside Lefkas town, on the eastern side of the island. Lefkada island can be considered the extension of mainland Greece, from which it is separated by a 50-metre sliding bridge!