The atmosphere consists of a mixture of

The weight of the atmosphere can be measured with special instruments, the barometers, and we find the weight decreases as the altitude increases.

We consider the atmospheric pressure at sea ​​surface, at 15 ° C, to be the standard unit of measure equal to 1013 HPa (or 1013 mbar), to be able to evaluate its fluctuations.

Heat and humidity are the two main causes of all weather phenomena.

☀ Because hot air is "lighter" than cold air, the heated air (from the ground) begins to rise, creating a zone of low pressure.

☀ When it reaches higher layers, it cools and condenses.

☀ The "heavy", condensed, cold air of the upper layers starts to move downwards and this results in the creation of a zone of high steam pressure. 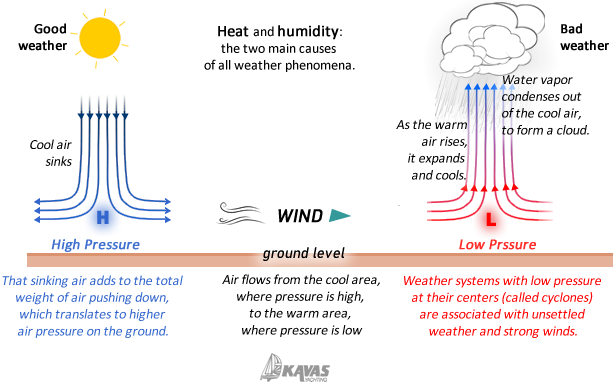 Considering the above, it follows that with the constant movement of air masses (hot or cold), the atmospheric pressure is constantly changing.

The minimum atm. recorded pressure was 870 mbar and the highest 1084 mbar. 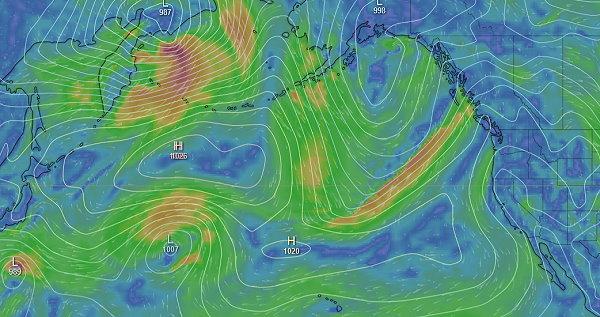 If we were to put down these fluctuations as data on a graph (image above), and we connected the points of the same atmosphere pressure, we would have the formation of curves, which we call the isobar curves.

An air mass is defined as a large body of air with uniform weather conditions, such as similar temperature and humidity.

They can extend thousands of kilometers in any direction

Air masses are of 4 types:

Unstable air masses have different temperatures and pressures and can produce storms.

As barometric systems we characterize atmospheric air masses of large dimensions with a special kinetic state. 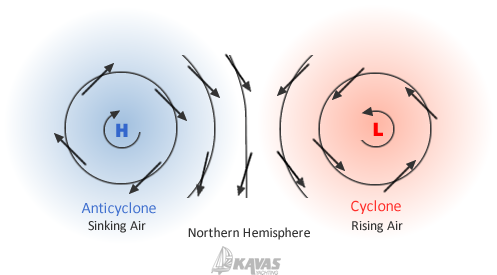 Barometric High (HIGH) Converging air masses in the upper atmosphere find a way out, by swirling downwards in a clockwise direction (Northern Hemisphere). On the way down they warm up, dissolve the clouds and contribute to good weather.

The rotation of the earth affects the simple pattern of wind that rises to the very hot equator and sinks to the poles, producing large wind spirals (Coriolis force).

The combination of two such systems, produces stronger winds such as "Meltemi", a phenomenon that concerns all those who take sailing holidays in Greece (Aegean).

One instrument that we should consult often when traveling is the barometer.

* sharp fall, worsening weather to watch out for.

The meeting of two air masses, of different temperatures, is of great interest.

The boundary between them is called the front and they are characterized by the temperature of the air mass that moves faster.

The hot air mass moves faster than the cold one that precedes it.

In this case the hot air mass, being lighter, climbs and slides over the cold one.

The warm air (always richer in amount of water vapor than the cold), forms an extensive cloud system in front of the front, which is usually stormy!

A warm front is depicted by a red line with half-moons, located on the side of the direction of its motion.

Unlike hot fronts, cold ones show no signs of approaching!

The cold mass penetrates violently under the warm, which forces it to rise sharply to higher layers.

As the cold front passes, there is an exacerbation of the weather:

Cold fronts are depicted by blue line with triangles, pointing in the direction of motion

This pressure difference moves cool masses of air from the sea surface to the land.

The opposite happens at night. The denser and heavier air on land, is forced to move to the sea.

The temperature differences between land and sea at night are smaller, so the land breeze is weaker than the sea breeze.

The wind has speed and direction.

If you are familiar with only one of the two units, you may have difficulty using the weather reports with ease, so we give you the following practical way to convert.

Extend your palms, paying attention to the 10 fingers:

The weather forecast concerns the study of atmospheric data and the physical atmosphere of specific geographical areas (cubic areas of a few km).

The smaller the side of the cube, the greater the prediction accuracy but with a more limited depth of time.

When we want to be informed about the weather, using applications such as "Windy", we start with a general model that will inform us long term and then go with a local one for short term updates.

Check out these interesting sources for your weather forecast in the Greek seas.

Note: Most forecasts give the average value of the expected wind.

The rule says that we add 50% to count for the gusts!

☀ An obvious sign that the weather will be bad is in the very sparse Cirrus clouds, which form in very high layers, heralding the arrival of a warm front (usually).

⛈ If the Cirrus thickens more (Cirrostratus), we will see a wreath surrounding the sun or the moon (halo), so the signs of a warm front (bad weather) are amplified.

☁ As the front approaches, the clouds lower and thicken even more (Altostratus), until the sun leaves no shadows on the objects.

🌧 Finally, the clouds release rain (Nimbostratus) for the next 4 hours.

☼ Cumulus: They are the white clouds that resemble cotton. These are not a cause for concern and are a sign of summer weather.

🌩 Cumuloninbus: These clouds are of much interest because they threaten the safety of sailing. They grow vertically, starting almost from the surface of the sea, covering the entire troposphere. Visually, they are presented as a very tall stack of Cumulus. Inside this large vertical stack, there are strong up and down currents, thinder, lightning and hail.

2. If we see lightning (west), we count the seconds until we hear the thunder and then divide this number by 3.

The result gives us the distance of bad weather from where we are.

3. Clouds are a threat when they are dark in color, not white.

When you see this sign, confirm the atmospheric pressure drop in your barometer.