When it blows it can be pretty harsh

In times past, the Meltemi wind was known as the Etesian norther winds and although when it blows it can be pretty harsh on both land and sea, it cools things down considerably.

This is especially true during the hotter months of July and August, but unlike other breezes and winds in this region of the world, it can last a few days.

The wind generally blows from the North East and is mainly more of an issue during the months of July and August when it can get up to anything between 4 to 7 on the Beaufort scale. 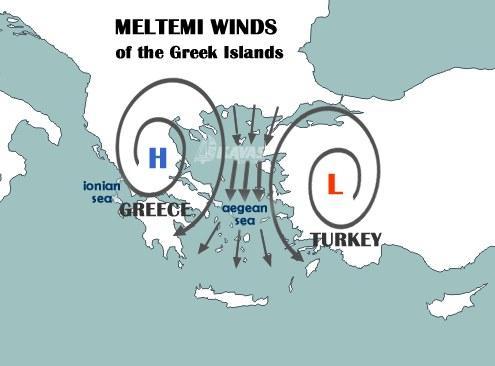 However, if you are planning a sailing holiday through the Cyclades, the Meltemi does not blow quite as strong there due to the fact the islands are that much farther south in the Aegean Sea.

With this said, the one place not to sail if you want to avoid some of the choppiest seas in the region, is around Evoea where you'll encounter the 'Cavo Doro' which boasts being one of the windiest places in these Greek waters!

BETTER TO STAY IN PORT, THAN TO BECOME A STITISTIC!

Check weather reports before setting out:

If the wind is blowing anything above 7, it's best to stay in either a nice sheltered port or bay and enjoy the beautiful scenery.

In Greece, the Meltemi is also known as the 'etesian' wind which translated means 'annual wind'.

These strong, dry northern winds actually blow all through the summer from June right through to September and sometimes they can last another month too.

It has also been known to start a month earlier in May, which is something else you need to bear in mind if you are planning an earlier sailing holiday in these waters.

When the Meltemi does blow, it tends to be that much stronger in the afternoons and typically dies down again in the evenings.

On average the Meltemi blows at around 4 to 5 on the Beaufort Scale, but at times it can reach quite a lot higher which is anything between 5 and 7 or occasionally 8 too.

For the seasoned sailor, it can be a real joy when the Meltemi starts to blow as it means there is some serious sailing to be enjoyed.

However, for newcomers to yachting and boating, it can prove pretty challenging when the Meltemi starts blowing which it can do quite fitfully.

The problem is that this wind can be a little unpredictable in that it can suddenly start up without any warning even when the weather is glorious, thus catching you off guard because you least expect it.

Although the Meltemi blows in the Aegean Sea, it does not affect the Ionian Sea which is too far to west and actually the Ionian and Aegean are two very different seas.

However, in these waters you have to watch out for the Maistro Wind which is another kettle of fish altogether and which is the far better choice if you are new to sailing or are looking for a more relaxed holiday afloat in some glorious but calmer Greek waters.

If you are planning a sailing holiday in the Cyclades, it's well worth reading up on the best areas to sail before you plot a course.

For the seasoned sailor, it can be a sheer delight when the Meltemi blows a little Meditteranean storm, but for anyone who wants a quieter sail in calmer waters, it might prove a little too challenging and uncomfortable when these infamous winds start blowing.

An extensive overview of everything you need to know before sail in Greece: