When we talk of ‘points of sail’ we’re not talking about the corners!

What we are talking of is the rough direction the boat is travelling in relative to the wind.

Sailors talk of this as a way of explaining the way the boat behaves.If you are on a dead run for 20 miles you could set far more sail in a stronger wind than you ever could close hauled.

You might even be able to avoid reefing altogether on a dead run in a Force 7, though it is better to have experienced crew on board in case you have an accident!

Within these three broad terms you have refinements as can be seen in the diagram below. Let’s go into some detail.

On a run you are heading roughly down wind. 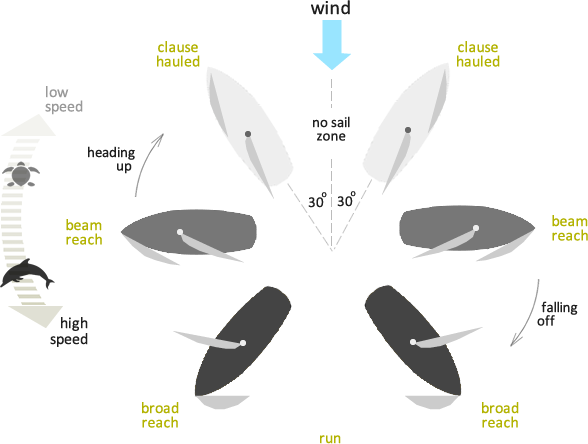 You can set the spinnaker and blast downwind seemingly as fast as the boat will go. If you are nervous about using the spinnaker (it involves a lot of organisation and the crew has to be pretty switched on for the whole time) you can set the jib and mainsail as a 'goose wing', where the two sails sit either side of the mast.

This point of sail can be dangerous so you will often tie a ‘retainer’ from the end of the boom to somewhere forward such as the pulpit to prevent the boom slamming across the cockpit in a ‘crash gybe’.

Interesting fact: Americas Cup sailors like being sucked, not blown.

Reaching can be faster than a run. On a run you are being blown downwind while on a reach you are being sucked along. Sails on modern yachts are really only flexible wings that reduce the air pressure on the forward side of the sail and consequently you get sucked into the low pressure zone.

As you will have seen in the Americas Cup, it is actually possible to go faster than the wind you feel while standing still.

Americas Cup catamarans never did dead runs. Instead they laid off a bit so they could broad reach down the course. This is so they could take advantage of the laws of aerodynamics and get that extra 10 knots of speed. While you will never go as fast as an Americas Cup boat, the principles still apply to you.

On a 'broad reach' you are doing what the Americas Cup boats are doing – laying a course just off a dead run. Your speed will be as quick as the boat actually can go. While faster it is actually a little safer than a dead run too, as errors on the helm won’t always result in a crash gybe.

On a 'beam reach' you have the wind on the beam. The boat will buck and dive, and you will find that it is one of the most fun points of sail.

With the wind forward of the beam you will be on a 'close reach'. On a mono-hull you will find the boat is heeling a lot and relative to the wind being further aft of the beam you may have to take sail in. In choppy weather this is where the less steady sailors may turn a bit green, passing their lunches to the fish. You will find that spray will start coming over the bow and while quite quick it will be a lot less comfortable.

The term 'beating' is very apt. Your bow will slam into the seas, the boat will slam (it will sound like a drum in bigger winds) and if anyone is going to lose their lunch it is probably going to be at this point of sail. Catamarans and mono-hulls differ in their behaviours here too.

On a mono-hull you will find you are heeled hard over with your leeward beam in the water. In anything more than a Force 5 wind it is advisable to insist that crew going up to the bow will have to clip on at all times. As long as they are clipped on, kids may find it fun to stand on the bow as if you jump in the air at the top of the wave you will find yourself weightless for a second or so until the bow hits the trough (usually meaning you get soaked!). The navigator will find that while beating you have a fair amount of leeway on, meaning that you might be going sliding sideways at 15 or so degrees to the course you are sailing. Your 'voyage made good' (VMG) may benefit from laying off a bit.

You should never beat on a cat. Unlike mono-hulls they don’t have much of a keel below the waterline and consequently very little to ‘grip the water with’. This means that closer than about 50 degrees to the wind your leeway will be ridiculous. You should also reef earlier on than in a mono-hull.

While in a mono-hull if you get hit in a gust on a beat you could broach (the hull will go right over and all Hell will break loose), it will self-right as long as you get head to wind quickly.

While Kavas Greek charter catamarans are almost impossible to flip, we emphasise ‘almost’ here. Cats that flip will float – upside down!

Forward of around 30 degrees to the wind you will find that the sails cannot be set and you are 'head to wind'. It is actually possible to stop the boat by setting the jib aback and hauling the mainsail hard across the cockpit in a position known as 'heaving to'.

Generally when you don’t have enough momentum to get through a tack you will find yourself head to wind. You only need to back the jib and that will get you onto your original course, where you get that momentum and can try again.