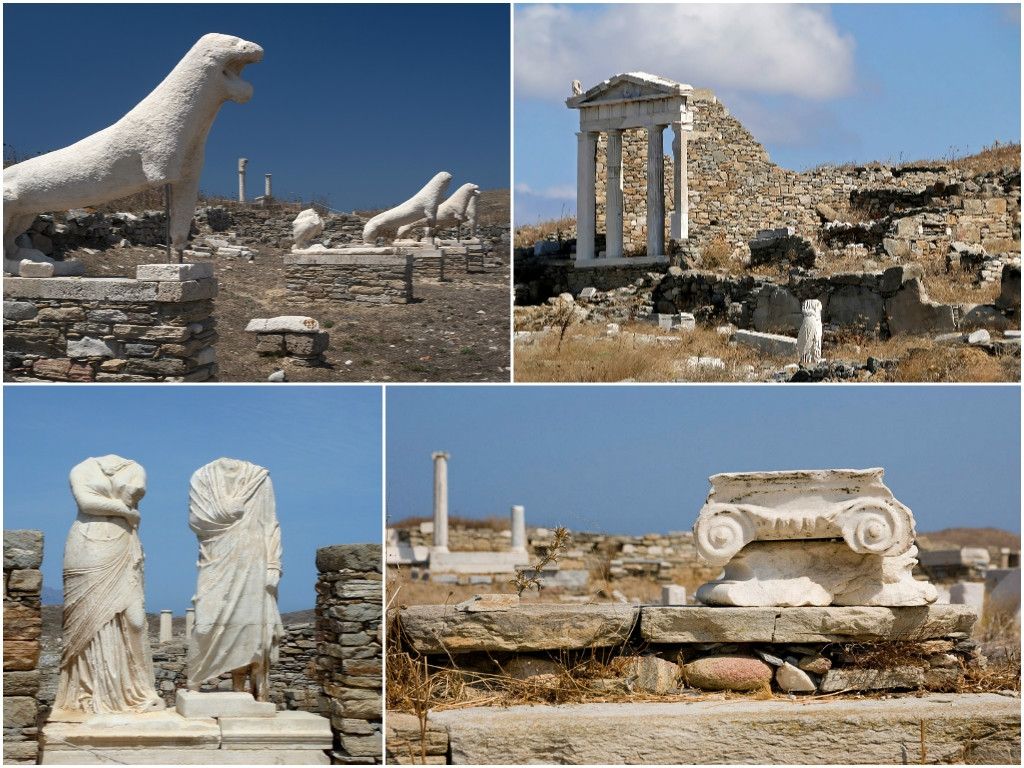 The beautiful island of Delos was once one of the most sacred places in Ancient Greece and boasted many temples dedicated to the Gods.

Today, the island is a supreme archaeological treasure that is definitely worth exploring and the best part is that it's only a couple of miles away across the water from Mykonos.

In ancient times, Delos was a busy port and important religious centre mainly due to it's idyllic location encircled by three other islands of the Cyclades.

It was the perfect stepping stone between mainland Greece and Asia.

According to legend, it is birthplace of both Artemis and Apollo which sees the island steeped in mythology and fabulous fables.

Explore the many ruins of Delos

Today, this delightfully small island attracts many visitors who arrive there to soak up a little of times gone past exploring the many ruins that still stand on this barren and hilly landscape.

The port is situated close to the ruins on the west coast and boats arriving there from Mykonos bring vast numbers of tourists and visitors all wishing to take a tour around the island.

The actual ruins consist of four areas which are the Maritime Quarter next to the harbour, the Theatre District, Apollo's Sanctuary and the Lion District which are all spread along the coast.

There is a small tourist centre where you'll also find a restaurant and bar. However, there is no accommodation on Delos so it's not possible to stay on the island overnight.

Walking in Delos is like walking back in time

With this said, spending the day exploring the many ruins is a fascinating experience that takes you back to ancient times, even if there is very little left of the magnificent temples that once stood proudly honouring the Gods.

This does not mean you don't get to soak up a unique atmosphere whether it's near the port where you'll find an impressive monument known as the Agora of the Competialists, a thriving community of Roman merchants in 150 BC.

Walking through the ruins is an experience not to be missed especially when you arrive at Apollo's Sanctuary, the Sacred Lake and Dionysus' Sanctuary which is close by.

There's a superb museum located here full of artefacts together with a tourist pavilion that allows you to sit back and take it all in surrounded by  magnificent ancient ruins and mind blowing columns.

Delos: photo opportunities around every corner

The whole island offers splendid photo opportunities around every corner and although the lions that now adorn the Terrace of the Lions are replicas of the originals, it does not take away the magnificence of this ancient site.

However, five of the original lions are now displayed in the island's museum with the sixth having been taken to Venice in the 17th century.

You really do need to spend the day exploring the beautiful ancient island of Delos camera at the ready because there is just so much to see and marvel at.

From a grandiose structure to the last remaining stones of what was once an impressive temple, theatre, marble statue or column, the photo opportunities are tremendous.

The fact that Delos is so close to Mykonos makes for a wonderful journey of discovery on an island that times seems to have forgotten.