Tip: Zoom in & out or move the red markers in the map above

Looking at aircraft routes around the world, you will often see that they don’t fly in straight lines between departure and destination, but instead curving routes.

If you were to look at the routes plotted by ocean liners and racing yachts, you will see the same - they curve around the Earth as opposed to taking the ‘straight’ route.

Simply, when plotting a course over a distance of 500 miles or more it usually makes sense to travel a ‘Great Circle’ route between origin and destination as it will be a shorter distance over the surface of the planet than the straight route - also known as the Rhumb Line.

A piece of string

The simplest way for you to understand the concept of a Great Circle route is to take a  piec        e of string to a globe.

If you put one end at the origin and the other at the destination and held it straight, paral lel with the equator, you will get one distance known as the ‘Rhumb Line’.

Curve it north (or south in the Southern Hemisphere) along a Great Circle and you will find that the length of the string required to connect the two points is shorter.

As an example, in a course plotted between Portugal and Florida, you can save 138 miles by taking a northerly curved route.

Sailing on a typical cruising yacht, that is the best part of 24 hours’ sailing between your origin port and your destination.

Most charts are designed to ‘flatten out’ the Earth through the Mercator Projection. Developed in the 1500’s by a Dutch geographer, the projection is designed to show the planet as if it was flat and not round while maintaining accuracy in terms of latitude and longitude for navigation around the planet.

While New York is roughly on the same latitude as Madrid, the distance on the map would suggest that a straight line on the map is the shortest distance but this has been thrown out of whack by the Mercator Projection of the Earth.

The shorter route is in fact a northerly curved route. Your shorter route would be to head north, close to the Greenland coast and then south to New York.

The Sinking of the Titanic

The shortest route gets you closer to the icebergs

Sailing a route between Spain and the US, you would leave the warmer latitudes with its gentler weather and close to the parade of low pressure areas that charge from Canada to northern Europe with their violent weather.
Far north in the Atlantic you will find that as well as storms you will also have icebergs.

One of the reasons that the Titanic got mixed up with icebergs on its fateful trip is that the Captain decided to take the shortest route (Great Circle)!!!, as part of his attempt to get the Blue Riband steaming trophy for the fastest passage across the Atlantic.

Taking the ship the shortest route put it in harm’s way and ultimately into its fateful collision with the iceberg.

This issue means that masters of ships and yachts will often work out their perfect Great Circle and then adjust it for a longitude limit on a route known as the Composite Great Circle.

This would extend the route some but will also take the vessel out of the way of the worst weather and sea conditions. Even big ships can be broken up in screaming gales and 10 metre seas.

Where on the Rhumb Line, one sails in the same direction every day between origin and destination, the Great Circle would in theory mean that you adjust your route every hour or so to match the route.

On aircraft travelling at 500mph this is necessary as they will travel the 3500 miles between Europe and the East Coast of the US in only seven hours.

On a yacht however, you may only do 250 miles in 24 hours - the same as an aircraft would in half an hour! This means that navigators tend to adjust the course of the vessel slightly every 24 hours at midday.

Everything in this world is about compromise as where you may gain a few miles on the polygonal course over a curve, this makes for easier navigation for the helm.

It is hard enough steering a course within 2-3 degrees of that demanded over an hour, let alone being told to adjust your course, for example by 0.25 of a degree every 20 minutes!

if you go the shortest route (along a great circle) from one point to the other, your direction will be changing all the time 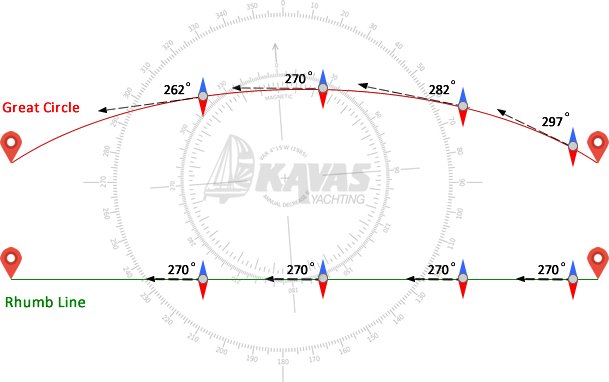 Over a longer oceanic passage, it makes sense to travel on a Great Circle Circle than the Rhumb Line due to the extra time and energy involved.

Sailing between Cadiz (Spain) and Miami (US), this could amount to a day’s sailing over the passage (150 NM less).

Don’t take this too seriously if you’re sailing from the Aegean island of Kea island to Syros island as the Great Circle between the two islands would be so miniscule as to drive you crazy working it out for only a few metres of actual distance saved!