One of the draws to the sea is that it is about independence and freedom.

This may be the freedom to go wherever you wish, do whatever you want and being free to enjoy an adventure as you care to do. Many a salty tale however centres on accidents and how you made it home.

Where all sailors love those rare moments on a long broad reach in perfect winds with the crew on the rail with shit eating grins across their faces, the tales we often tell are of "that storm", "that fire", or "that sudden offshore wind that caught us unawares - and how we got home to tell the listener that story"

Even in countries with very well developed sea rescue systems and bodies such as the Royal National Lifeboat Institution in UK waters, it can take at least half an hour for a boat or aircraft to get to you. 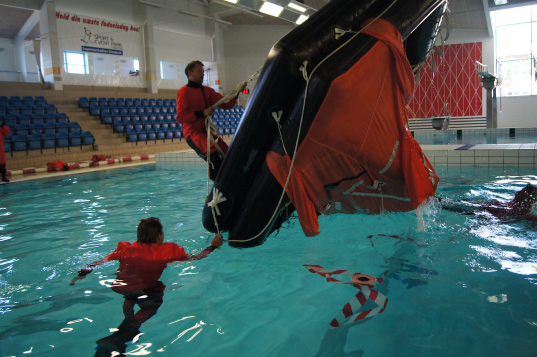 In countries with a good sail training scheme, for example Greece, Ireland, the UK or the Netherlands, as you learn to sail you will cover emergency situations in depth.

You will do Man Overboard drills until it becomes second nature, and learn how to tackle a fire before it reaches the gas bottles and turns your beautiful yacht into matchwood.

The more you sail the greater risk of an accident.

As your confidence improves so you will push ever harder. Core to that confidence is in getting good training.

There are some countries in the EU where their training schemes were developed by bureaucrats that we doubt had ever been to sea, notably Luxembourg, and others where there are no training schemes at all such as Cyprus.

Where you want to learn more, and not just get a piece of paper to satisfy a marine police unit, it is therefore advisable to consider a course from a country that does have a good scheme.

Cypriots should consider the UK's Royal Yachting Association (or the Greek sail training scheme for a course in their home language), where Luxembourgois a course in a language they understand, be it German, Dutch or Franco - Swiss.

We hesitate to suggest France as though the country has some of the best racing sailors in the world by a large margin, their training scheme was written by bureaucrats!

Here are some tips to remember if, perhaps you're aboard a boat where the skipper gets incapacitated and you have little or no sailing experience, yet want to get home alive. 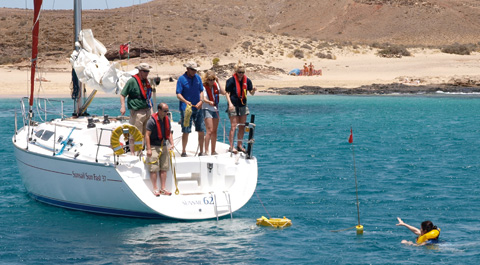 Get someone to watch the victim in the water.

They are never to take their eyes off them.

Gybe the boat as quickly as possible.

Get the engine on and drop the sails.

Seconds matter here as even in foot high seas you can lose sight of the victim very quickly.

Remove one of these and you kill the fire.

Smother the fire with a blanket and remove the oxygen.

Get water on it and kill the heat.

Remove the fuel, and it has nothing to burn.

Beginner's Guide to Sailing: If Fire Erupts on Your Boat

Call MAYDAY on your VHF - see below.

As a general rule, the bigger craft you are on the safer you will be.

Many deaths at sea have resulted from people getting in their life rafts before it was necessary.

Therefore, you really should only get in the life raft when your yacht is starting to go under the waves and when you're certain you can't stop it from doing so.

Beginner's Guide to Sailing: How to save your ship from sinkin

Good First Aid courses are available that take only a day to complete. That day could save yours and your crew's lives. This is too complicated to cover here.

Good sailors on a yacht have an alternative power system to the engine. 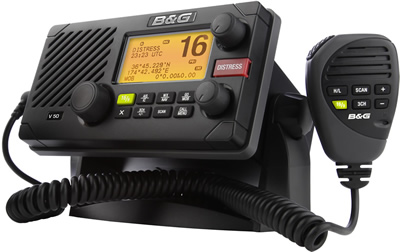 By international law, all coastal VHF networks must have someone who speaks fluent English at the local coastguard / marine police centre on duty at all times.

You always call for help on Channel 16.

Most modern VHF sets - including all of our yachts' systems - have a button saying 'Ch 16'.

Press that button and make the call for help.

There are two emergency calls you can make:

If your vessel is in immediate danger of sinking or you have had a serious accident such as a dismasting, call MAYDAY.

The protocol is that you say the following:

The Coastguard will respond.

Say the nature of your emergency, and position in latitude and longitude from your GPS system.

In this situation you may need to get the heck off your boat quickly but do try to ensure they know where you are exactly so they can look for your life raft.

You call for medical assistance if someone is in grave danger due to an accident but there is no risk to the vessel.

This might be a heart attack or a broken bone.

The coastguard will respond, and you are to give them:

An old salt will tell you that 'proper preparation prevents piss ups'!

The more you learn at sea, the more likely you will get to tell the story over a beer when you get ashore.

It is a matter of pride that the writer of this blog, who has sailed all over the world and had some very serious accidents in this time to include two sinkings, a dismasting, and engine failure in a building offshore wind, has only once been taken home by the coastguard, and that with a suspected broken leg after it was crushed between his 500 tonne ship and the dock.

The better training you have the better chance you have to tell the tale.

Several of his friends and former shipmates haven't come home despite being extremely experienced and brilliant sailors.

The sea is beguiling by its beauty but like the Sirens of Greek mythos, very dangerous indeed.