Sailing around Greece, you will likely see a host of traditional vessels that have been unchanged in design over hundreds of years. Predominantly you will see trehantiris and kaikis, but if you’re lucky you might even see a Karavoskaro!

Let’s have a look at these vessels that have been the backbone of Greek trade for hundreds of years.

Sometimes described as a ‘donkey of the sea’, trehantiris are slow but good in heavy weather. It is better to get where you’re going rather than rush and not get there at all! 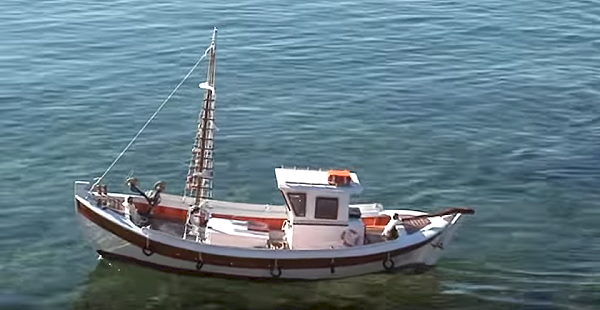 Trehantiris are still used for fishing in the Aegean, and are renowned as being very good sea boats, capable of taking whatever Neptune has to throw at them. In the days of sail some were as much as 40 metres long and weighed up to 250 metric tonnes! They were used for carrying cargo around the country’s coasts and islands.

Many were rigged with a lateen sail though into the 20th Century a number carried schooner or lugger rigs. These newer rigging systems allowed faster sailing at all points of sail, though the lateen is good in downwind sailing and on a reach.

You may be lucky enough to go on a sailing trip aboard a trehantiri, as many of these vessels have been used for island hopping around the country.

Trehantiris resembled other Mediterranean vessels, and in other countries were also called trabacoulo, for example, in Dalmatia in what is now Croatia.

Another important Greek vessel is the kaiki, which ply all over Greek waters. Indeed, you will even see these on the Bosporus straits leading into the Black Sea. They are very similar to the Turkish kayiks, whose name has been borrowed by canoeists who today use the similarly named kayaks…

Kaikis are lighter and smaller than the trehantiris, and are predominantly used as fishing boats, though again many fishermen take people on cruises aboard them in the summer. One of the things that really stands out about them is their ornate bowsprits, with figureheads among the most beautiful of any traditional vessels afloat today.

Though traditionally built of pine, the design of the kaiki has moved with the times and most are now built of glass fibre and composites. These are sturdy and almost unsinkable, as with the northern European dories in use in that part of the world.

Turkish kayiks have a very similar aim to their modern descendant, the kayak. These are long, narrow and shallow rowing boats designed to take passengers.

The karavoskaro was built as a deep sea trading vessel, and some have been as big as 500 tonnes displacement, with a length in excess of 50 metres. Originally built in a similar way to the trehantiri, the design was quickly found to be good even on very large vessels, and many plied the seas as trading vessels and even as warships in the age of sail.

A number of these great ships had square rigging and up to 3 masts, configured as brigs, barques and fully rigged ships. As the design changed, with elements of other Greek vessel design brought in including the trehantiri, so old salts in the region sometimes named them as ‘bastardos’, because they were offspring of unrelated parentage in design terms.

Just because a vessel has a dodgy parentage doesn’t mean to say they are ugly! If you visit the annual Greek Traditional Boat Show then you will see some karavaskaros of great beauty and lineage!

From these three vessels, Greece has become a great maritime nation with interests all over the world. You could be in Madagascar, Singapore or Los Angeles and find a Greek merchant ship coming into port one day. If you do, it is because these sturdy, fine craft enabled Greece to have such a fine maritime tradition!