Ever wondered why your binnacle compass points toward the North?

Why does it point just away from True North due to 'variation'?

Let's explore this peculiar phenomenon that does far greater things than merely allowing a yacht to be navigated - what about keeping the atmosphere intact from solar rays?

What about enabling birds, turtles and salmon to navigate between their feeding and breeding grounds? The 'magnetosphere' is integral to life as we know it. 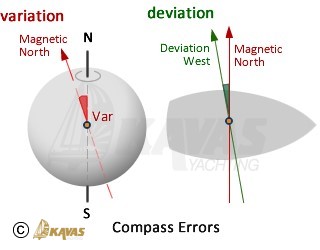 In another Kavas blog we have looked at navigating the old fashioned way using manual navigation. Navigating manually, your compass will never point at the true pole on the planet. It will always point at the 'magnetic pole'.

This variation from True North is known aptly as 'variation'. Depending on where you are in the world and when you do the calculation, Magnetic North will be in a different direction from True North. You can calculate the variation using your chart and a nautical almanac, as it can be projected several years ahead.

In general it is understood that Magnetic North is migrating westward.

The British Geological Survey explains why this might be the case:

This is particularly apparent in the Atlantic hemisphere at mid- and equatorial latitudes. This may be related to the motion of fluid at the core surface slowly westwards, dragging with it the magnetic field.

Every 300,000 to 400,000 years the magnetic poles of the planet switch ends for the same reason described above - the molten metal moves around the core and switches polarity.

One of the places you should really plan to visit on a yacht charter with Kavas in the Greek islands is Zakinthos, home of the endangered Loggerhead turtle.

Turtles spend much of their time at sea but don't idly drift wherever they want to go. They mate at sea and then lay eggs on Zakinthos, and may travel thousands of kilometres afield every year.

To find Zakinthos they have an organ in their body that has tiny pieces of magnetite in the cells. See what we're getting at? They navigate the world's oceans using an internal magnetic compass.

Turtles aren't the only animals like this. Indeed, it seems that humanity is one of a minority of species without the ability to navigate by magnetoception.

Migratory birds, fish, butterflies and even some bacteria can orient their way to the Earth's poles. This has only really entered the world of science in recent terms, and is one of the things that ecologists and biologists are looking at today.

A lesson in geology

You may be aware that the world we inhabit relies on a crust just a hundred or so kilometres thick on the surface of the Earth.

You will know that lava from the mantle, a layer of liquid rock, is forced out through volcanoes such as Santorini and Vesuvius.

In Greece we have an active earthquake zone where the continental plates on the crust interact due to the collision of the European and Asian plates. These and the volcanoes are interrelated as they are signs of what is taking place in the liquid, semi liquid and solid rock and metal layers beneath.

The Earth hasn't cooled since it found its orbit billions of years ago. The plates on which we live are habitable (at least when volcanoes aren't spewing on nearby lands) but inside is a dynamic system of solid and liquid rock and metals that behave in different ways according to their depth and pressure.

At the centre is a solid lump of iron, surrounded by liquid nickel and iron. The liquid nickel and iron surrounding it is both responsible for the magnetism of the Earth and the fact that Magnetic North and True North are different. That it is liquid also means that variation differs every year.

The atmosphere is protected by magnetism

The magnetosphere is one of the most important reasons that life on the planet can survive.

The planet Mars is widely understood to have no molten core and little if any magnetosphere. This is why the planet can't support life as complex as we have on Earth. No, I'm not saying that life has even been found on Mars yet, but I am saying that scientists widely regard the lack of a magnetosphere as being the reason for no atmosphere being able to support life in current times.

The Sun is an angry beast

In the Arctic you will see the Aurora Borealis (Northern Lights) at night. This is the magnetosphere protecting the planet from the solar winds and solar storms that blast across the solar system. The Sun is an angry beast and storms boil up on its surface, letting fly particles that blast us.

The magnetosphere is like an invisible 'force field' that deflects the solar winds and allows our atmosphere to remain in place. Otherwise the atmosphere would have been blasted away into space. The magnetic core is quite a bit more important than allowing silly humanity to navigate around its surface!

Satellites in Earth orbit are also protected by the magnetosphere. If there was a problem with the planet's magnetism then this could knock out communication and navigation satellites as well as rendering our binnacle and hand compasses unusable. Modern life is quite fragile when you think about it...

Could we see the poles switch?

An article in Newsweek at the end of January this year raised the unsettling possibility that the Earth's poles could switch.

As we stated above in the navigation section of this blog, according to geological history the planet should flip polarity every 300,000 years or so in recent geological time. It hasn't for some 780,000 years.

"Since 2014, Swarm—a trio of satellites from the European Space Agency—has allowed researchers to study changes building at the Earth's core, where the magnetic field is generated. Their observations reveal that both the molten iron and nickel are draining out of the Earth's core. That kind of restless activity could indicate that the field is preparing to flip..."

Not all scientists agree that this is a certain or even imminent event. I remember being told that we were overdue a flip in the late 1980's when I was learning navigation. 30 odd years is insignificant when it comes to geological time - we've been 'overdue' this phenomenon for longer than humanity has been living in cities.

"These reversals occur slowly and irregularly, and for a period of about 30 million years around about 100 million years before present, there were no reversals at all. In addition to full reversals there have been many aborted reversals when the magnetic poles are observed to move equatorwards for a while but then move back and align closely with the Earth's spin axis. The solid inner metal core is thought to play an important role in inhibiting reversals. At the present time we are seeing a 6% decline in the dipole moment per century. Whether this is a sign of an imminent reversal is difficult to say."

What the British Geological Survey are saying is that something is happening but there have been failed switches in polarity in the past, and there again there has been a spell in the past of some 70 million years when there was no switch in polarity at all.

We won't go into the speculation of what would or wouldn't happen should our magnetosphere weaken. It is interesting that Newsweek did state,

"Scientists have yet to establish a cause-and-effect relationship between pole reversals and mass extinctions".

Don't move into your bunker just yet...

There's no immediate cause for concern and it isn't time to jump into the bunker you bought in case civilisation comes to an end. There are far more immediate threats to life on Earth that we can change - how about our addiction to oil and plastic?

If we want to save humanity then perhaps the time has come to change our immediate world and do things like reducing our impact on the atmosphere.

No magnetosphere is going to save us from filling it up with carbon dioxide and other nasties so perhaps we should worry about that more!