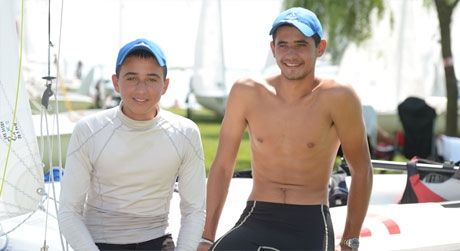 In a performance which can only be described as exceptional, brothers Alex and George Kavas outclassed the fleet to claim Gold, marking their third successive podium finish at 420 Championships. The 420 Worlds for 2012 were held at Lake Neusiedler See, Austria (27.7 - 5.8.2012). During the first five races of the qualification series, the leaderboard was close as David and Alex Charles (ESP) and the Greek brothers matched each other's overall points in their respective fleets. But when the two sets of brothers came head to head in the final series, the situation unfolded differently. Speed was the name of the game for the Greeks, and they had the edge whatever the conditions. Described by their coach as sailing 'like computers' after two race wins on the first day of the Championship, the pair continued with the same approach, scoring a total of 7 wins from the ten race series, an extremely rare achievement for the 420 World Championship.

The turning point for the Charles brothers' assault on the World Championship title came after equipment failure forced them out of race 9, and added unwanted points to their scoreline. "We are really happy with this result, third is a good place," said Alex Charles. Astonishing that last year the brothers didn't event qualify for the 420 Worlds and this year have won gold at the ISAF Youth Worlds and bronze at the 420 Worlds; podium finishes to cap a great year of racing so far. We can expect to see more from them at the 420 Junior Europeans later this week.