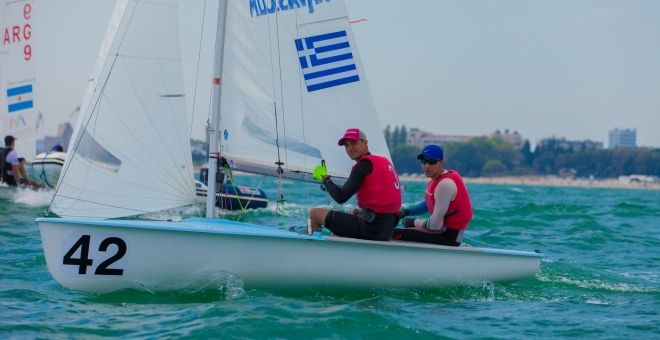 Two races for the 420 Open and Under 17 fleets and three for the 470 gives a shake-up to the leaderboard as the early hierarchy starts to become established.

The 470 Men have finished their 5-race qualification series, while the 470 Women continue a single-series. In the 420 Open, gold and silver fleets will be decided after tomorrow’s 2 races, with the 420 U17 fleet sailing a single series.

Matteo Capurro/Matteo Puppo (ITA) climbed from 8th to 1st with a three race score of 2,3,1 and the discard kicking their 10th place from race 2 off their scoreline. Holding a world ranking of #37, this long term partnership is intent on claiming their first podium finish at a Junior Europeans. They were close in 2013, leading early in the Championship series, before mast breakage forced them off the race track, ruining any hope of a medal finish. In 2014, Capurro was too old to compete at the age-restricted Junior European Championship, but returns to the race track in 2015 as the age limit increased to 23 years and under to support the transition to 470 senior fleet racing.

A new partnership making a first time appearance at a 470 Championship are Alexandros Kavvas/Akylas Drougkas (GRE), who ended day 2 in second overall. The pair has racked up many years of experience separately, and from their form so far it would be difficult to guess they teamed up just a few days ahead of the Junior Europeans. Racing with his brother, Alexandros won the 2012 420 Worlds, before stepping up to the 470 Class.

“We didn’t expect we would do so well,” said Kavvas. “We have trained a lot over the past two years, and there are some good boats in Greece to train with. We know we are good sailors and have good handling in the boat, so the only thing was to work on our teamwork and sail as best we can. We spent 3 or 4 days together before the event and then just the 5 races so far.”

Reflecting on the Championship so far, Drougkas said, “I have missed racing a lot, and I feel really confident since getting in the boat together with Alex. I think that is why we can sail well and have an open mind. The fleet is really competitive and most of all we are enjoying it.”

Another pair who made their mark in the 420 before transferring to the 470 are twin brothers David and Alex Charles from Spain, who sit in third overall. In the same year Alex Kavvas claimed 420 Class gold, the Charles brothers secured 420 World Championship bronze medals, and won the ISAF Youth Worlds. A different class to master, rewards in the 470 have been harder to come by, but still include a bronze medal at the 2014 Junior Europeans. For the future, the brothers have their sights on the Tokyo 2020 Olympic Games.

The 470 Men fleet is now split into gold and silver groups for the 6-race final race, leading up to the top 10 medal race on Saturday 15 August.